Edgewater Lumber is a family-owned and operated lumber business in Georgia, with 3 dedicated trucks for hauling board footage lumber.

With several trucks involved in the business, Edgewater Lumber soon realized they had a freight optimization problem that was costing them both time and money.

If there is anyone who has a good grasp of trucking and lumber, it would be Brian Sutton. The fourth generation of the Sutton family to take up the trade, Brian’s life revolves around hauling lumber on trucks. After helping his dad manage a small fleet of 30 trucks for over 26 years, Brian branched out in 2014 to form Georgia-based Edgewater Lumber.

Edgewater Lumber had a modest start, running a single truck to pick up lumber. Now, the company has three dedicated trucks running 400 to 600 miles to pick up loads and bring them to the business. These are in addition to the six other short haul trucks responsible for making daily deliveries.

With several trucks involved in the business, Edgewater Lumber soon realized they had a freight optimization problem that was costing them both time and money. 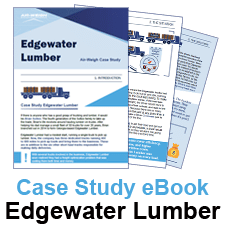 Unlike standardized freight, lumber is tricky as the weight can substantially vary based on if the wood is wet or dry. Since lumber yards load by board footage, each truck could be loading on different weights, despite having the same footage.

And as drivers get paid by board footage, they want their loads as heavy as they can safely make them. However, the lumber yard won’t let a truck leave before it’s weighed. Without a set of weigh scales on board, the drivers have no other option but to use the yard’s scales. With a single set of scales outside of the office and the lumber yard loading 30 to 40 trucks a day, drivers could be stuck in a queue for hours, waiting for their turn to be weighed.

This meant the Edgewater trucks had nothing to do but sit and idle, burning fuel as the clock kept ticking. To make the situation worse, if the load was overweight, the driver would have to get out of line, unload, and wait in line again. Because there are so many trucks in the yard at any given time, it could take a driver 2.5 hours just to get out of the line.

Wanting to get their load and get out as quickly as possible, a driver would load light so they wouldn’t risk going through the line a second time.

They kept checking the readings against the yard and CAT (Certified Automated Truck) scales, but once they were confident, they had no issues loading up to the limit. All the drivers now know how to calibrate. The hardest part to start with was being scared to calibrate. They weren’t sure how to do it at first, but that went away after one time, it was really easy, and once it’s done, you’re fine; it’s spot on. Took them one hard week to get confident to trust it, and once you trust it, then it’s good.

It’s not just the drivers that have learned to trust the accuracy of the Air-Weigh On-Board Scales. Many of the lumber yards that Edgewater works with have seen the results first-hand. Now, instead of having to join the queue to be weighed by the office scales, Edgewater trucks can get loaded and skip the line, so the drivers are always the first ones out of the yard. And because they aren’t sitting and idling, drivers save time and fuel, making every haul more profitable.

Brian explained that good drivers, the ones that love their jobs, are hard to find. Truck driving can be a stressful job, and an overweight load can be a significant source of that stress. Before Air-Weigh On-Board Scales, Brian’s drivers were always on the lookout for DOT spot checks and were especially anxious pulling up in an area that didn’t have scales. If they got pulled over, they had to hope that they were within the weight limit. Now that their trucks are equipped with Air-Weigh On-Board Scales, they are no longer concerned.

“They’re waiting for DOT to pull them over, the worry is done because they know their weight. They’re not worried about it or getting caught around the corner. My drivers want to get pulled over, Brian joked. Our drivers are SPOILED now and don’t even want to leave the parking lot if the scales aren’t on the truck!”

“You wouldn’t believe the return on investment — these scales have paid for themselves in less than a year with the maxed-out loads,” Brian said.

As the one paying the bills and managing the operation, Brian stated that he is able to maximize each and every load. There is no wasted time; they load once, load legal, and go.

From the driver’s perspective, the Air-Weigh On-Board Scales have changed the game. Because they know the scales are right, they’re not afraid to take the load right up to the limit. Now, instead of loading light, a driver can max out their load, within 300 lbs, and drive through CAT scales without a worry.

Using the Air-Weigh On-Board Scales, carriers can max out their loads without the fear of being over the legal limit. This means fewer trips, better efficiency, and an overall smoother and safer operation. No more pulling up to the scales and hoping that the load comes in under. No more being scared of authorities pulling them over for an overweight load. No more adding extra time to the trip to avoid the CAT scales. Drivers can operate safely and confidently as their loads are going to be the right weight, every time.